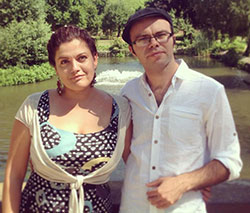 Ukrainian researchers Nadia and Oleksiy Lipes will discuss records in the Ukrainian archives that are relevant to Jewish family research, emphasizing archives in Kiev and eastern Ukraine, but Galician records will also be included. The different kinds of records, their unique features, and their availability will be discussed. Ukrainian archives include Metrical Books (parish registers); rabbinical records of births, deaths, and marriages; census tables 1795-1900; Jewish Population Census of 1875; Russian Empire Population Census of 1897; police records; lists of army recruits; Kahal and pogrom records, and WWI Jewish refugee lists in Kiev.

Nadia and Oleksiy (Elisha) Lipes will be visiting Boston on their way from Ukraine to Salt Lake City, where they will speak at the International Conference on Jewish Genealogy. In a special preview for the JGSGB, they will present one of the lectures they have prepared for the Conference. Based in Kiev, Nadia and Oleksiy provide Jewish genealogy research and tour services. Bring your questions!