Kelly O’Neill – Into the Archive: Voyagers from the Russian Empire to the United States

Over the course of the 19th century, over half a million subjects of the tsar set sail for America. The records of their voyages are held at the National Archives and while they provide only a sketch of each man, woman, and child who left the empire behind, when taken together they are a powerful tool for understanding the social and geographical origins of Russia’s immigrants. Dr. O’Neill will introduce the sources and a set of interactive tools she has built to allow researchers to identify patterns, uncover stories, and better understand the historical context of the 19th century. 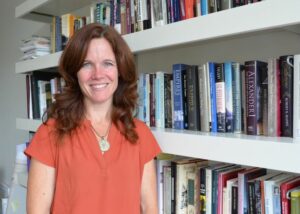 Dr. Kelly O’Neill is a historian of the Russian Empire. Her first book, Claiming Crimea: A History of Catherine the Great’s Southern Empire, was published by Yale University Press in 2017. In 2018 she established The Imperiia Project at Harvard University, which integrates history, geographic information science, and historical cartography. She teaches, conducts training workshops, and regularly presents her research to audiences ranging from high school students to colleagues at academic institutions around the world.